On September 29, the European Solidarity Center hosted the first of a series of conferences devoted to the idea of ​​ Solidarity for the 21st Century, developed by Lech Wałęsa. Special guests of the event were Antonella Calle, spokeswoman for the YASUNIDOS movement, and Manari Ushigua, a shaman of the Sapara tribe from Ecuador.

Both of them are fighting for the preservation of invaluable tropical forests in the Ecuadorian part of the Amazon, which are the property of the native Indian tribes and whose existence is threatened by the brutal practices of oil companies to which the Ecuadorian authorities grant mining licenses in spite of Indian protests. The conference was led by an excellent journalist, specializing in climate issues for many years, author of, among others, the popular “Antymatrix” blog, Edwin Bendyk. 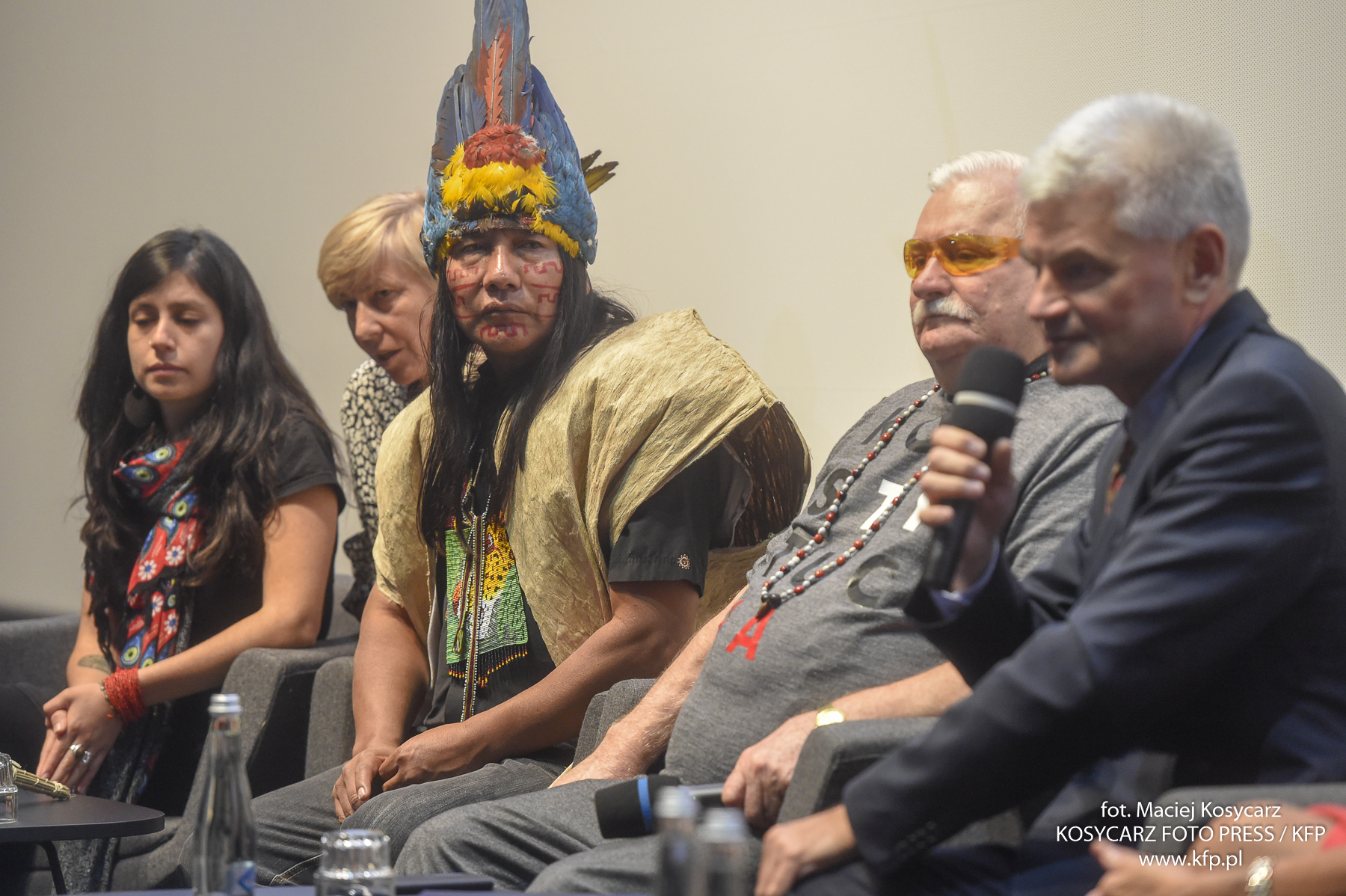 Special guests, Antonella Calle and Manari Ushigua, during in a discussion with Lech Wałęsa. The conference was moderated by Edwin Bendyk.

The "Climate Solidarity" conference gathered several hundred guests in Gdansk who jointly debated the progress of climate change and the threat of a recent climate disaster if the global community fails to take decisive action to protect the environment and the climate. The speakers agreed that the biggest obstacle in the fight against climate change is the thinking by the governments and global business only in terms of short-term profits, without taking into account environmental costs. All participants agreed that this issue requires new global solidarity and a sense of responsibility for the future. They emphasized that science provides us with decisive evidence of progressing climate change and suggests solutions on how to counteract them - but decision makers in most countries around the world are not ready to introduce them.

The conference, organized by the Lech Walesa Institute in cooperation with the City of Gdańsk, the Marshal's Office of the Pomeranian Voivodeship and the European Solidarity Center, began with the projection of the film "The Curse of Abundance" directed by Ewa Ewart. The material was an introduction to the discussion of President Lech Wałęsa on climate solidarity with special guests from Ecuador - Antonella Calle and Manari Ushigua. President said that the current model of development, prioritizing competition and getting rich, is unsustainable. "Each country does not look at ecology but at itself," he said. He appealed for joint discussion and agreement on divisions regarding climate protection. 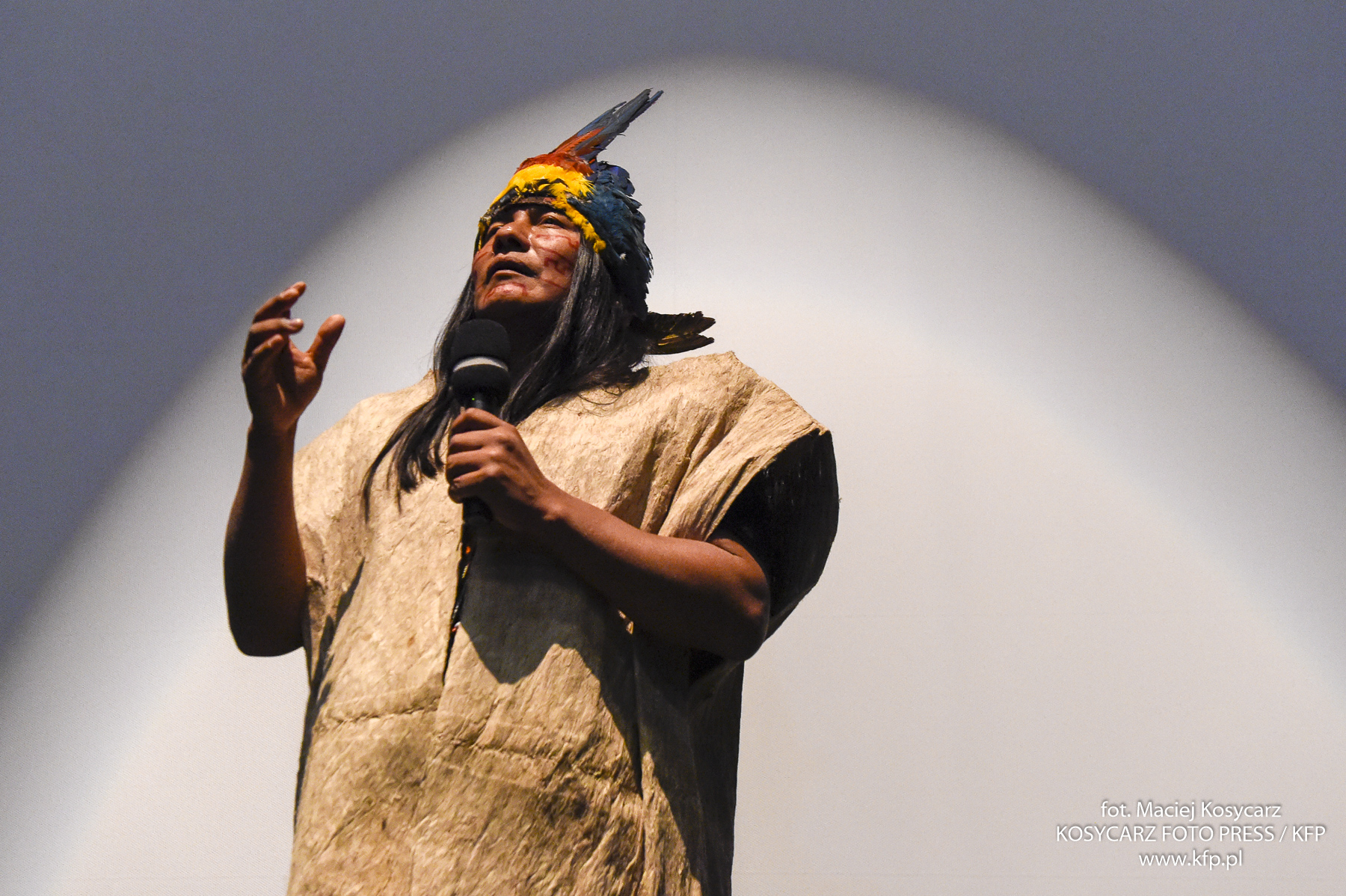 Manari Ushigua, leader of the Sapara tribe from Ecuador. Since a few years global mining companies want to extract oil on the territory of the Yasuni National Park, inhabited by Sapara. The struggle for preservation of this area continues.

Manari Ushigua and Antonella Calle talked about the origins and development of the Yasunidos movement, as well as their experience of the struggle to stop oil production in Ecuador, which is ongoing and needs support from the international community. They called for the search for common denominators between different movements fighting for climate protection and influencing politicians. "In the end, we all breathe Yasuni air," they emphasized. Guests from Ecuador, together with the President, took part in a press briefing during the conference. 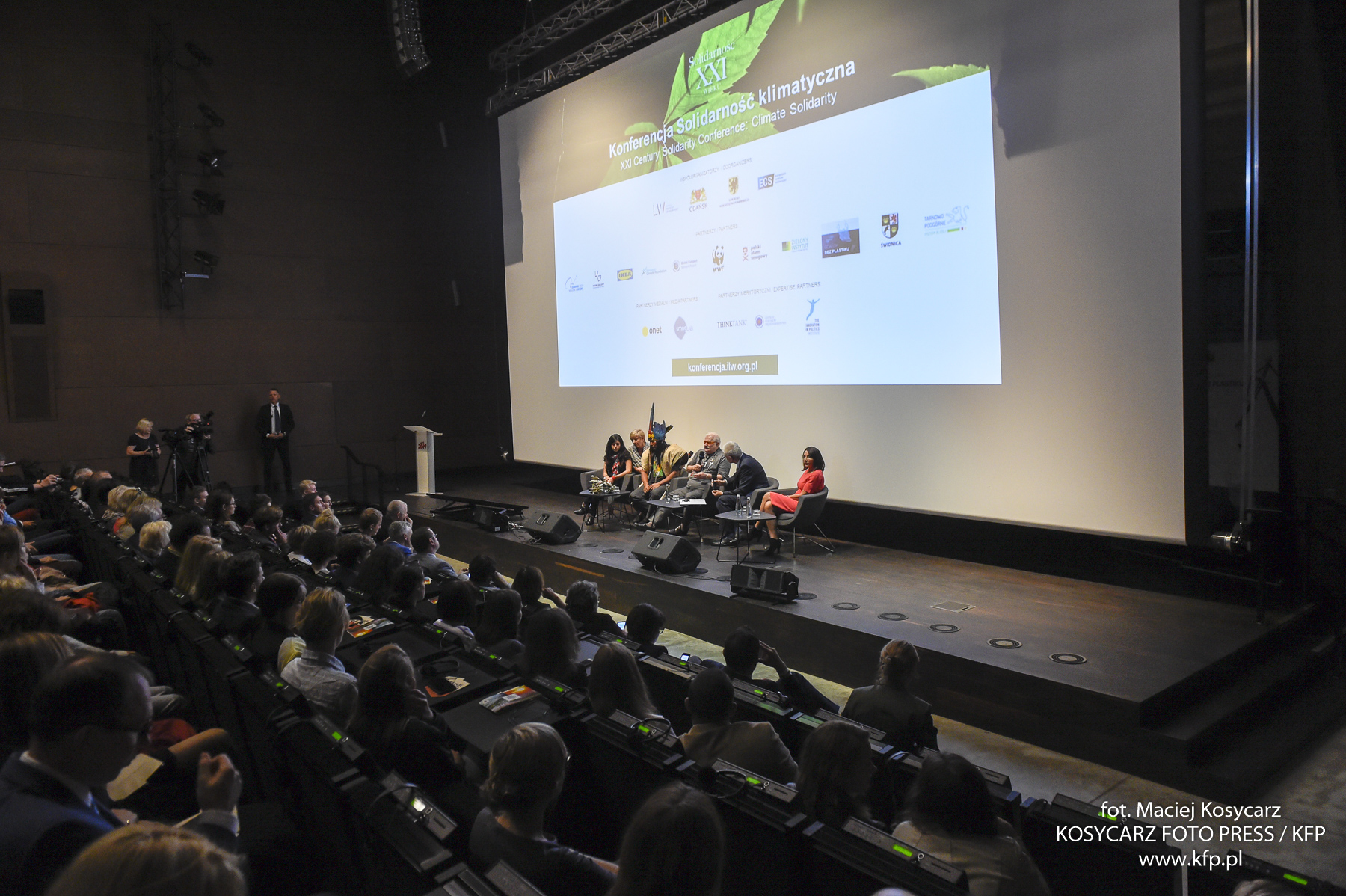 The conference in the European Solidarity Centre gathered hundreds of people.

The subject of the first panel with the participation of invited guests were good business practices, related to climate protection. In this part, the following speakers presented their ideas: Rafał Sonik, creator and author of the Clean Tatra project, Olga Malinkiewicz, an outstanding Polish physicist and inventor of the cheap method of producing solar cells based on perovskites, which may revolutionize the acquisition of solar energy on a global scale. Katarzyna Broniarek, IKEA Communication Director in Poland, spoke about the future of solar cells, and the panel was summarized by Kamil Wyszkowski, representative and president of UN Global Compact Network Poland, who through the presentation of the results of many studies and scientific studies presented the scale of the threat for the whole world, has called on participants to act. 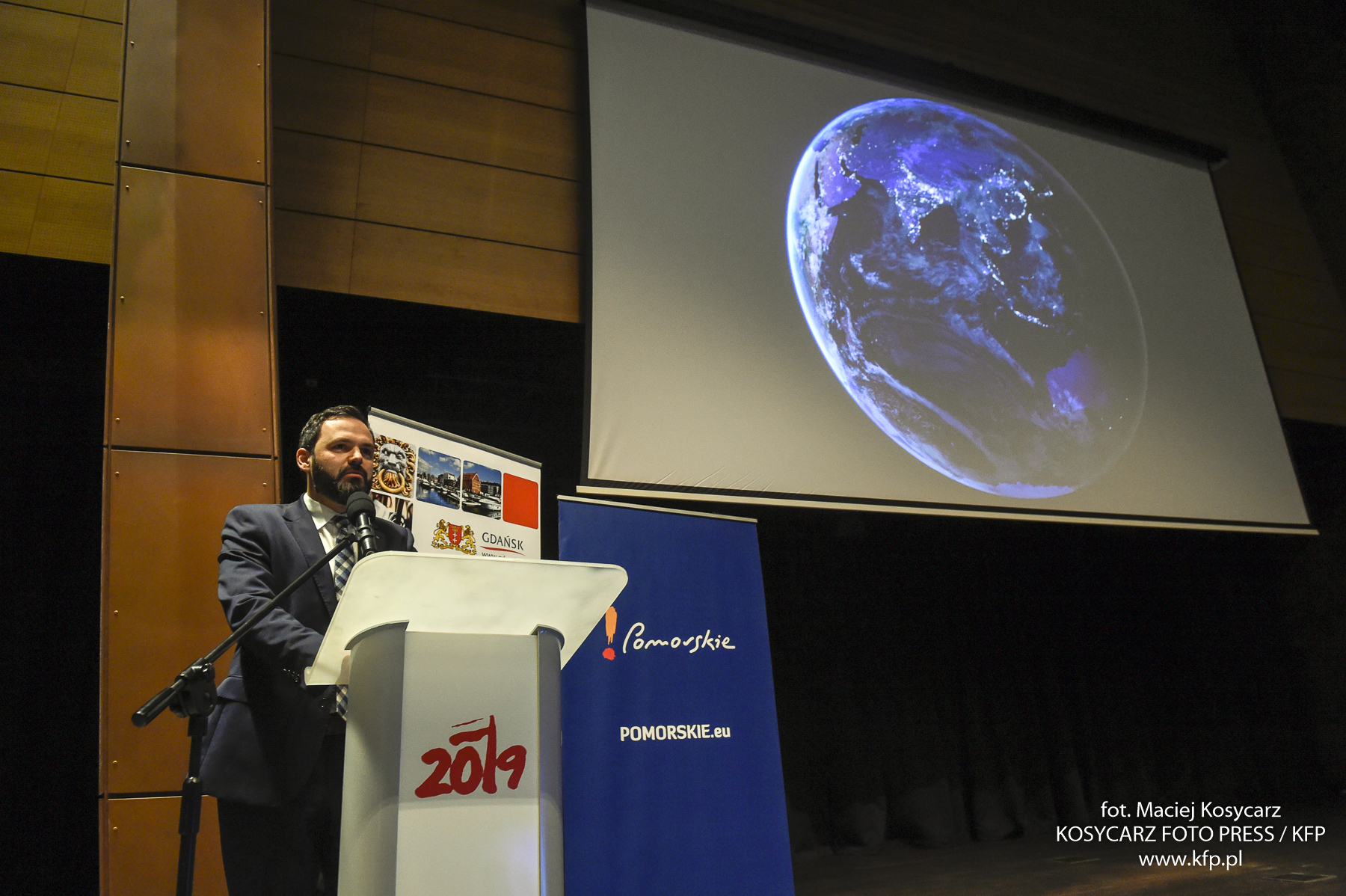 Kamil Wyszkowski, representative of the UN Global Compact Poland, speaks about the climate change which we are to experience in the next couple of years.

The second part of the conference was devoted to good practices in local government policy and was started by the spontaneous speech of Dr. Justyna Glusman, the Director of the Sustainable Development and Greenery Coordinator (Warsaw City Hall) on behalf of President Rafał Trzaskowski. Piotr Styn, Director of the Ecology Department of the Marshal's Office of the Pomeranian Voivodeship, spoke about voivodship investments related to climate protection, while the initiative "Gdańsk without plastic" was presented by Piotr Borawski, Deputy Mayor of Gdańsk for entrepreneurship and climate protection. The speech of the President of Świdnica, Beata Moskal-Słaniewska, showed the guests how smaller cities in Poland deal with the issue of climate protection, while Andrzej Guła, the founder of the Polish Smog Alarm, talked about the fight for cities without smog, which introduced the topic of smog to public debate in Poland. This part of the conference was closed by Ewa Chodkiewicz, a representative of WWF Poland, in an educational presentation on the WWF project addressed to local governments entitled "Zero-waste commune".

Special guests of the event were also representatives of the Youth Climate Strike from around the country, who in the closing ceremony spoke about their postulates and activities, as well as the need to take immediate action on the climate. Their important and interesting performance (Małgorzata Czachowska and Sebastian Radzimiński) was met with an extremely warm welcome from the audience, which gave a standing ovation. 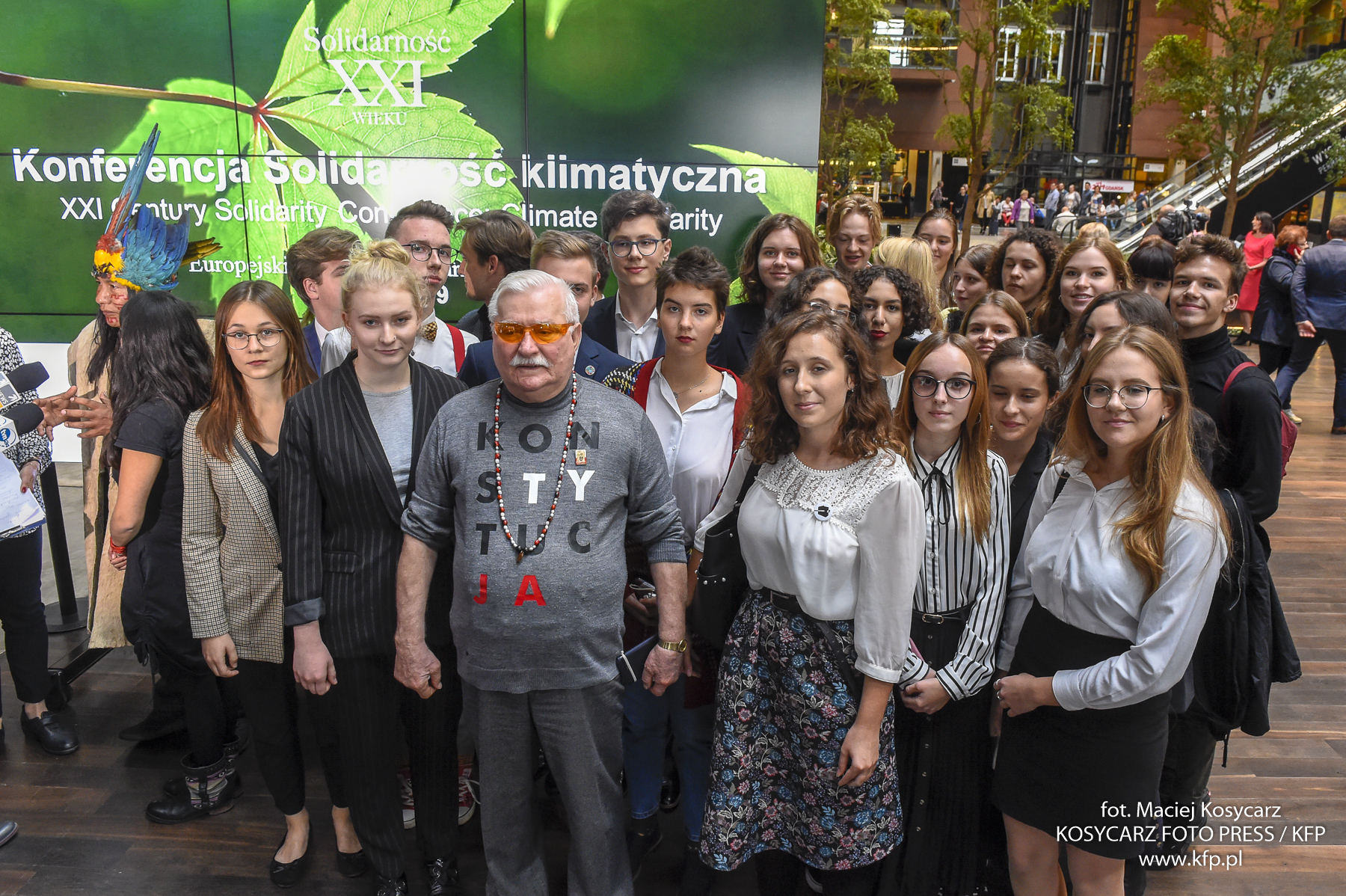 Lech Wałęsa spoke with the representatives of the Youth Climate Strike, expressing his support for their actions.

The conference ended with a reading by Adam Domiński, President of the Lech Wałęsa Institute, of a letter signed by the Nobel Peace Prize laureates, including Lech Wałęsa, supporting the Global Climate Strike and calling for global climate solidarity. A group of more than 50 people surprised everyone with a unique performance - they sang the song "Will you grab my hand", telling a story of the common struggle for a better environment. The president also met with the striking youth, supported them and invited them to cooperate.

Media about the conference: